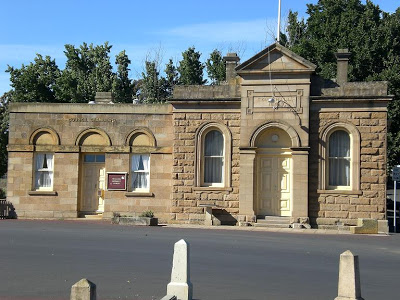 Under Down Under Tour – Day 1

Here we go! On the first day of our tour, I woke up at 7:00 so we could be at the bus by 8. I met the other people (not including the three girls I had already met) that I would be spending my next 3-5 days with – the number of days on the tour varied from 3-6. I was on a 5-day tour while some were on a 6-day and others were just on a 3-day. The group was a great size, there were only 10-12 people on the tour at any one time. I feel that the small group tours are so much better than large ones. With the smaller ones you end up getting to know everyone really well!

Our tour guide was doing his first tour in Tasmania. He had previously been a tour guide for 10-years in the deserts around Alice Springs and Uluru (my next tour!) so his enthusiasm was really infectious. It certainly was better being on the tour with him than being with a tour guide who was already bored of what he or she was doing.

Everyone in our group was friendly and excited to get started. After breakfast we headed off for our first stop: the historic town of Ross! It was a quick stop, we looked around a bit at the old stone buildings and churches and had a cup of coffee (or I did at least – we did wake up at 7!). It was a beautiful little town, but very quiet. It was good for visiting, I think, but maybe a bit boring to live in. On the way out of Ross we stopped to see a bridge that was built by two convict stone masons many, many years ago. They were released after they completed it because the governor was so happy with the carving work they did on the sides of the bridge: Perhaps he should have looked a bit closer at the carvings though, because they had carved his face in the bridge in a very uncomfortable fiery background. I wasn’t sure which one was his face, but when I get home and can look at the pics more carefully, I’ll see if I can find it. Can you find it? Here you can see an even closer look at one of them. I also really loved the carvings on the inside of the bridge. We definitely don’t use roman numerals often enough! After we were finished at the bridge, we all got back into the bus and headed to the postcard-perfect beach at Wineglass Bay.

Normally, people just do an hour hike up to the main scenic views of this beautiful beach, but we were lucky enough to be able to do the five hour-trek before getting to the best part. It may sound it, but I am not being sarcastic here either. It was a fantastic hike. I hadn’t been hiking since college, and this was just lovely. We started the hike off going through a wooded area: And there were some neat rock formations at random spots along the trail. Tasmania, I have learned, is quite the rocky place. We saw a few wallabies in the woods (wallabies are kind of like smaller versions of kangaroos) and they didn’t seem to be afraid of us at all. I can only assume that they were used to hiking people who would feed them, which is actually pretty sad. Animals should have a healthy fear of humans. We can be pretty rotten. After quite a bit of walking through the woods, we came to a couple of amazingly beautiful beaches. Here is a picture of the first (smaller) one we came to. It was here that a wave managed to get me while I was taking a video of the ocean and I had to walk the next couple of hours with damp sandals! We spent a little while walking along the second beach and looking at the interesting things that would turn up in the sand. I found a nice blow fish that I had for lunch. Hey, when you’re a backpacker, you take your meals wherever you find them! There were also a few really huge starfish lying on the beach. Just so you know how big they were, I put my foot next to it for scale. And as we all know, I have very big feet. Please, pay no attention to the fact that I have a sandal tan and my feet were dirty from walking in the sand. I do bathe in Australia. After our fantastic walk along the beach, we went back up to the wooded area of the trail. The trail was pretty high up above the beach, certainly higher than the tide would have come in, but we noticed that there were tons of shells up there and were trying to figure out how they had gotten up so far from the ocean. The shells were too big to have been dropped by fish-eating birds, and it seemed like too many shells to have been just brought up by hikers who found them on the beach and then got tired of them. As we found out, the Aborigines (native Australians) were big shellfish eaters and the shells had probably been there for years, discarded after a nice meal of clams or oysters. (Do you guys like how I force you to learn when you’re reading my blog posts?)

The end of the hike was the hard trek uphill rock climbing. We had about 25-30 minutes of a straight uphill trek until we reached the lookout of Wineglass bay. That climb was extremely difficult! My heart was pounding so hard by the time I got up to the top, but I did make it – and the view was SO worth it. Well, a picture is worth a thousand words so: And of course I had to pull the classic tourist move by putting myself in front of the lovely scenery. I was SO tired when this photo was taken! We had just done a close to 5 hour hike, after all! After a bit of marveling at the view and a bit of catching my breath, we did the same 25 minute hard hike, only downhill this time. That was SO MUCH easier. We made our way back to the parking lot to get onto the bus, and right there in the parking lot we saw a couple more wallabies! They had NO fear at all. As you can see in the picture below, a mother was feeding her child right in front of the cars! Though it looks to me like the child is almost as big as the mom, you’d think he’d be able to find his own food by now. We also saw another mother and child right behind our bus. This time the baby was small enough to be in the pouch. The mother got pretty close to us, I’m pretty sure she was begging for food. Those wallabies can be pretty crafty when it comes to handouts. But none of us fell for those sad little wallaby eyes. After we ooohed and ahhhed over the cute baby a little longer we piled back into the bus and drove to the first hostel we would be staying at, located in the town of Bicheno. It was a lovely little cabin-like hostel, with a real homey feel to it. We walked to a fish and chip shop for dinner, and I had the flake fish. I later learned that flake is actually the term used in Australia to describe the meat of a few of the smaller species of shark – usually Gummy shark. So, I can add shark to the list of new foods I’ve tried in Australia! And it was delicious.

After dinner we walked over to a rocky area called the ‘blowhole’ where we saw… get this… PENGUINS! That’s right, there were actually penguins on the beach. It was nighttime, so they were all asleep and we tried not to bother them too much. Unfortunately, I couldn’t get any pictures of them because these type of penguins have no eyelids to protect their eyes from the flash, and they could easily be blinded by bright lights. I had no desire to hurt the little penguins eyes, so I didn’t bring my camera. And in case you are dying of curiosity, the blowhole is called ‘blowhole’ because of the way water would shoot up from a particular part of the rocks when the tide was high and the waves crashed against it. I didn’t get pictures of it that night, but you’ll see pictures of it on day two when we go back there in the morning.

After the blowhole we went back to the cabin, all of us exhausted from the long day of hiking, and I settled down to watch an hour or so of the Grammys. Or was it the Emmys? I haven’t a clue, I never usually watch award shows because they are boring, but my brain wanted some mindless TV to help me relax before bed.

So, that was day one. And I have been at this computer for a while, so I will continue days 2-5 tomorrow. Hopefully it will go a lot faster, but there are just so many pictures and so much to talk about!

I would like to end today with a joke that I learned while here in Tasmania. Question: What do you do with a Wok? Answer: You use it to get the wabbits when you forget your wifle! Haha! Woka Woka!

So very sorry, and a little Tasmania!

Under Down Under Tour – Day 2