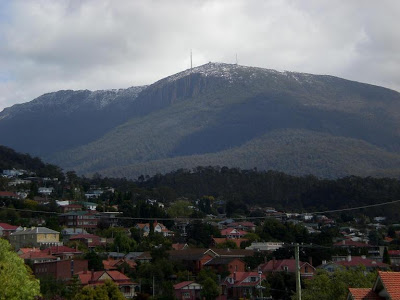 So very sorry, and a little Tasmania!

I am sorry it has been so long since my last post, and so very sorry to all the people who were worried that I hadn’t written or called for a few days, but I have two darn good excuses.

Those problems are in the past now, as I am at an internet cafe paying 5 dollars an hour for internet. Now I hope to update my missing days in less than two hours.

The trip I took to Tasmania was five days, and because each day is a bountiful glory of pictures and information, I will be separating each post by day. This way you don’t have to read all of them in one sittings and then probably get fired from your job – since I know most of you read this while at work, you naughty, naughty things you.

But first I’ll just talk a bit about my arrival in Tasmania.

Tasmania is one of the most beautiful places I have ever seen! And it is so varied in it’s beauty. You can drive a couple of hours and start at clean, beautiful beaches, move on to soaring mountains, and end up in temperate rainforests. It’s amazing how much is crammed into such a little island! It rarely gets too hot or too cold here (summer average temperature is 70 degrees Fahrenheit or so, and winter is about 50). In the short time that I’ve been here in Tassie, I’ve seen more rainbows than I’ve ever seen in my life! And the air is apparently ‘scientifically proven’ to be the cleanest air in the world! That says a lot, I think. What it says, I’m not sure, but it says something.

On my first night in Tassie, I stayed in a hostel in Hobart (the capital city of Tasmania). It is still a city (and we all know by now that I’m not a fan of cities), I am happy to say it was such a quaint little city with a view of mountains in the backdrop. I walked around for a couple of hours just marveling at the scenery (also I had been in the boat for 10 hours and the bus for four, so I just really needed to stretch my legs!).

Here are a few pics of the city of Hobart… Below is a picture to an area closer to the center of Hobart, so it is beginning to look more like a city – but it was still the nicest little city I had ever seen. One thing I really liked about Hobart is that all throughout the city there were these little bits of artwork in the sidewalk. Each picture was different. I’m not sure where they came from, but I’d bet that they asked a bunch of different people to draw them. It did give the streets a bit of pizazz! When I got back to the hostel at night, I ended up meeting three of the girls who were going to be going on the Under Down Under (the Tasmania) tour with me. Funny story, one of them was named Karen, and was from NYC. So I left one Karen in Heathcote, but met another in Tasmania! Well, I think this is a good place to end the teaser before I get down to the meat of what I’ve been doing in Tasmania (i.e. what went down on the tour). If you are lucky, I won’t get bored today before I finish writing them all, otherwise, I’ll finish the rest tomorrow. I do have some great pictures though! Promise.

Under Down Under Tour – Day 1