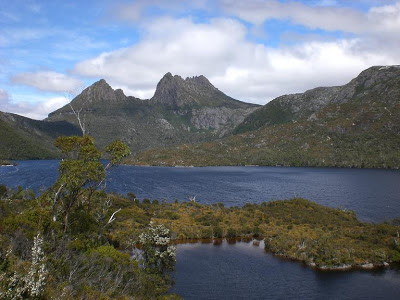 Under Down Under Tour – Day 3

Cradle Mountain! This was by far the best of the five days on the tour. Cradle mountain was SPECTACULAR.

First, before we even got to the mountain, we picked up another five people who joined onto our tour. They had no idea what they were in for!

It turned out to be another five-hour hike day, and this one was so much more challenging than the first five-hour hike. This mountain was TOUGH. There were so many loose rocks, and it seemed like this hike could be really dangerous – if you weren’t an expert mountain scaler like myself. <cough>

It was FREEZING cold in the morning – which did not seem to be a good thing when you were going up to do some serious mountain climbing. But being the trooper that I am, I just put on my warmest clothing (which was not very warm at all) and didn’t complain about the cold… much.

Here is a picture of Cradle Mountain from the distance. This was what we were going to climb. And just for fun I’ll throw myself in front of that view: That was my warm outfit.

The hike to get up to the mountain was killer. So much of it was just uphill, and the loose, gravely rocks didn’t make it any easier. There were points where you had to use chains to haul yourself up the tougher rocks. It seemed like more of the hike was actually CLIMBING than it was walking along any trails. And the cold… the cold…

Here is a picture of one of the harder bits to handle – but this isn’t even the hardest one. This one didn’t need to have chains to help us climb up. So, we did a few hours of climbing like that, and it wasn’t until THEN that we actually reached Cradle mountain. In the picture below, if you look very closely you can see the trail that we just did to get to the mountain. It’s that little white line that runs all the way from the back, on the top of the mountain… across one mountain, onto another mountain… yep, we walked that! And we were only halfway finished here! More walking, walking… I guess I can’t really say much about the walking besides the fact that it was tough, it was cold, and it was beautiful. You really had to be there, the beauty that popped up with every lookout area never stopped amazing me. Seriously, every time you reached a turn or a corner you would see something even more beautiful that you saw on the last turn! And as we got higher we started seeing snow in the mountain! I almost felt like I was in New Jersey! It was about this spot where we refilled our water bottles with running water from a stream. It was all just melted snow – pure and clean… best water I ever tasted. And, because I am still in Tasmania, I saw another rainbow up on the mountain. The picture doesn’t do the rainbow justice, it was much brighter and easier to see than it shows in the picture, but you can still see it. It did disappear a few minutes after this picture though. Shortly after the rainbow we had the downhill trek to get off the mountain. Wow, you wouldn’t think it, but downhill was so much harder than up. I was NOT wearing proper mountain climbing shoes, I was wearing my flimsy Yoga Slides. Yeah, I certainly gave them a beating with this hike. They didn’t have much grip or ankle support and I slipped more than a couple of times at some of the tougher downhill spots. I now know that if I ever decide to climb another mountain, I need to bring the proper foot gear. I made it down alive though!

After the mountain trip we headed back to the hostel for dinner. One of the girls who were on the tour with us was wonderful enough to cook us a spaghetti dinner and it was delicious! Especially after we had just gotten back from our death-defying mountain climb! Annoyingly enough, we ended up having to share our cabin-like hostel space with a huge group of rowdy and noisy 16-year old high schoolers. They were so tiny! I don’t remember being that tiny when I was in high school. And of course, being teenagers, they thought they were oh-so-very cool. I had quite the chuckle when one of the little boys looks at me and says, ‘How YOU doing?’ (or something to that effect) with a little wink. I wanted to give him a little pat on the head as I walked by, but I refrained. Kids.

And now for what some of you (Lisa) have been not-so-patiently waiting for – this night we went to a wildlife sanctuary where we could finally see… Tasmanian Devils! It’s not very common to see them in the wild anymore. They are all dying off because of a disease that is spreading through them like wildfire. It is a facial cancer that can be spread just through touch (a bad thing for an animal that is known for fighting and biting each other), and is fatal within 3-6 months. Since they discovered the cancer in the late 1990’s, it has spread throughout 65% of Tasmania… and 50% or more of the Tasmanian Devil population has died. It’s very sad. We learned all about this at the sanctuary where they are keeping as many devils as they can to try to prevent them from getting the cancer. I did get to pet one of them, and then we saw a bunch of them fight over the carcass of some animal in their enclosure. They do eat meat, and they don’t care if they kill it themselves or they find something dead or they steal dinner from another meat eater. They also don’t move around in groups or packs, they are loners, so they are always in competition with each other. Also, despite popular beliefs, they DON’T spin around fast in mini tornadoes. Here is a picture of a young one: The Tasmanian Devil thing lasted about an hour, and then those of us who had shelled out the 25 dollars to see them headed back to the cabin. In the pitch blackness. Yeah, we didn’t think enough to bring a flashlight and the dark was pretty freaky. The stars, though, were amazing.

During our walk back when we were just about at our mountain cabins we saw a creature running around in the dark. We were SO sure it was a devil! “Look! A Tasmanian devil! Yes! Yes it is a devil! I know it!” but after we followed it around trying to get a better look and flashing our camera at it for the little bit of light… we realized that it was just a possum. It would have been amazing if we did happen to see a Tasmanian Devil on the way back from our Tasmanian Devil show where they had just told us how rare it is to see a devil in the wild! Check out the picture in the dark, you can see how we would have been confused, right? So that is the end of day three! Oh, and I know that this is getting ahead of myself as I haven’t finished days four and five yet, but at the place where I stayed on the weekend after my tour, I learned that fairly recently, someone died from falling off of Cradle mountain. THAT is how tough the mountain could be, folks! Of course, this person was not smart enough to travel with anyone. He tried to go it alone. And he probably tried to scale the peak of cradle mountain… we didn’t do that. Tomorrow, I will do days four and five. Hopefully. I have already spent about 25 dollars on internet usage updating these darn blog posts.

Under Down Under Tour – Day 2

Under Down Under Tour – Day 4