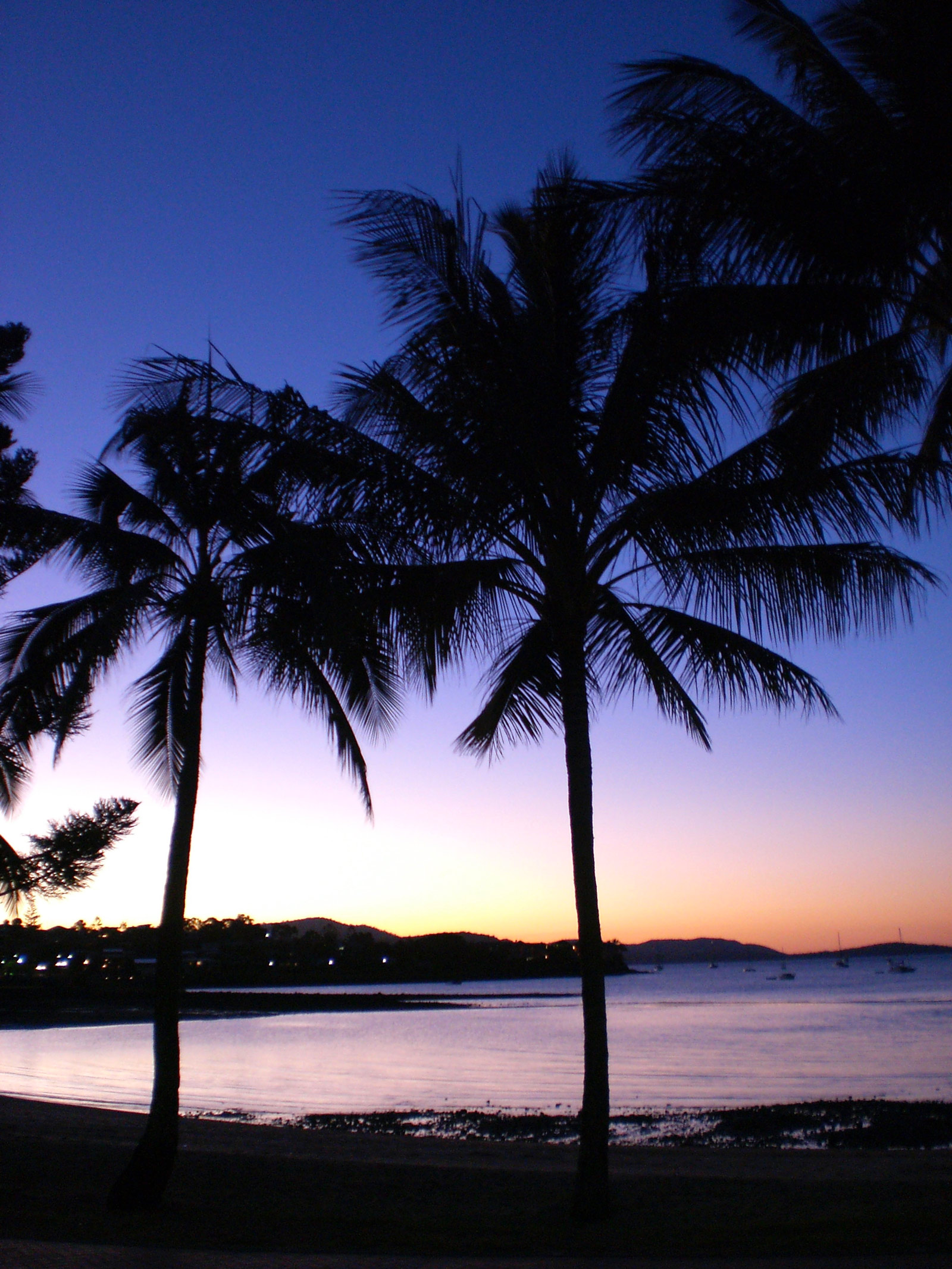 I wasn’t planning on writing another post before my trip to Frasier Island, but interesting things have happened so I just couldn’t stop myself.

First – I had a 12 hour bus ride from Cairns to Airlie Beach on the 9th. Airlie beach was an incredibly beautiful town, even though it was a big touris/spring break partying kind of place. I stayed at a hostel called ‘Beaches’ which apparently was just another huge never-ending party hostel. I don’t mind partying every once in a while, I’m not that old yet, but I am also trying to keep my partying to a minimum during this vacation. I’d much rather spend my money on things like kayaking with the dolphins than drinking beer, and Airlie Beach was only a short stop before my next 12 hour bus ride the following evening. But wow… I thought the hostel in Cairns was bad. The incredible noise at this place until all hours of the night – on a Wednesday! Airlie Beach is now the loudest place I have ever had to sleep in. If anyone were ever to ask me to recommend a place to stay whilst in Airlie Beach, I would have to tell them NOT to stay at Beaches – unless they want to party hard all night long. If that is the case it could actually be quite convenient! You can get drunk 10 steps away from where you are sleeping, and then stumble home at four in the morning, easy!

I did manage to sleep through the noise. I’ve become pretty good at sleeping through anything now with all the hostels I have been staying at for the last three months. Plus, I was exhausted from the long bus ride. I woke up the next morning and I had until 8:00 PM to explore until my bus left, so I decided to check out the town.

As you can see by these pictures, there is no arguing that Airlie is a gorgeous beach town: Unfortunately, there really wasn’t much to do there during the day – it was such a small town. It normally is just the starting point for those who will be doing the Whitsundays, an extremely popular destination for backpackers. The Whitsundays is all about sailing, scuba diving or snorkeling, swimming, and partying all night for a 3-5 day boat trip. I had decided against doing the Whitsundays for a few reasons:

So I skipped Whitsundays but I stopped at Airlie Beach anyway so I didn’t have to be on the bus for 24 hours straight.

So here are a few of the interesting things that happened while I was at Airlie Beach. First – I saw one of the girls from my Heading Bush group! Sandra, my yodeling instructor, was just walking by as I was eating lunch. What do you think the chances of that are? Australia is a huge place, and after Alice Springs we had all gone our separate ways to different parts of the country. It seemed like such an incredible coincidence that I saw her.

Interesting thing number two – later in the day, I saw two of the girls that were in my Surf Camp group! This was definitely an amazing coincidence! I was a little embarrassed when they called out to me – I sort of recognized them when they yelled my name, and I knew I knew them from somewhere, but I couldn’t remember their names, and I couldn’t remember where I knew them from. So I was trying to hold a conversation while mentally ticking off all the places I was sure I didn’t know them from. They kept asking me questions about what I have been up to, which had me worried that I would start talking about the place I had met them in. I think I pulled it off, and I did eventually figure out that it was surf camp – but not until after they left. I felt terrible that I couldn’t remember their names though because they didn’t seem to have any problem remembering mine.

The final interesting thing: look at the store they have here in Airlie: It was just like the Coldstone Creamery we have in the states! They mix up the ice cream in front of you and sing when you tip them. I hope they are made by the same company, cause otherwise, trademark infringement! The worker inside had never heard of Coldstone though. I have to admit, I think that ‘Cold Rock’ does it better with a picture of Uluru on the sign. Very clever. I can’t even remember whether Coldstone has any picture of a specific rock on the sign.

Enough about Airlie! After the 12 hour overnight bus ride, I’m now in Hervey Bay, which is the starting point to get to Frasier Island. Hervey Bay is another quaint little beach town. It’s bigger, but not nearly as party-orientated. It’s beach is also not nearly as pretty as Airlie Beach, but it is nice – and this one doesn’t have all the signs warning about the deadly jellyfish.

I arrived in town at about 9:30 in the morning, and wandered around a little to check out my newest temporary surroundings. I saw a beauty shop advertising a great deal on a haircut with free eyebrow waxing, and since I needed both, I took them up on it. It was better for me to get my hair cut in Australia instead of waiting until I get home – I knew that you aren’t supposed to tip in Australia, so I’d save a little money! at least I hope I wasn’t supposed to tip. Otherwise I stiffed the poor woman.

After lunch I felt exhausted. I practically had to crawl to my room to take a short nap. The bus ride I’d just come from was a red eye and it isn’t very easy to sleep on a bus. I had gotten maybe three hours of sleep, and not good sleep. I forced myself to wake up after a couple of hours so I’d be able to fall asleep that night and wandered around town again. There isn’t really much to do here either. These beach towns are pretty boring during the day, unless you are spending the whole time at the beach.

Tomorrow I’m off to Frasier Island to see the crystal clear water, beautiful sandy beach, and plentiful wildlife. You will learn all about it when I get back on Sunday. But for now, I’d better go back to the hostel and pack.