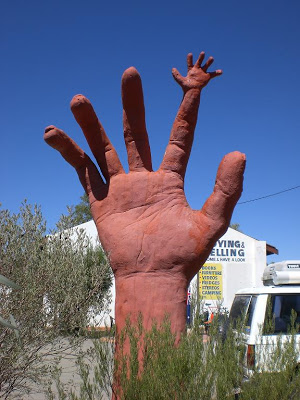 On today’s post I’m going to give you my perspective on Alice Springs itself.  But first, check out this awesome sculpture. Can you guess what kind of store it was in front of? Did you guess a second-hand shop? You’re right! What a clever advertisement.

Now I do have to admit that I didn’t feel very safe being a lone traveler in in Alice Springs. I’d say the main reason for that is because I would occasionally hear people talking about the bad things that happened to them while there. For one example: on my first night in Alice, two of the people from the other Heading Bush group said that they had a knife pulled on them for a cigarette. I heard three other girls talking about when they were walking home they saw someone being beat up with a wooden board. It was stories like these that made me decide that this was one place I would not be walking home alone at nigh.

Alice Springs was also the first place I have been to in Australia where there were a lot of Aboriginals living in the city. There was a difference between these Aboriginals and the ones we met on our Heading Bush tours. During the tour, all of the Aboriginals we met were very friendly seemed to be pretty happy. The Aboriginals in the city completely ignored me. Almost like they couldn’t even see me. I had a strange feeling that the non-Aboriginals and the Aboriginals coexisted, but they were in different universes. We would go about our business, they would go about their business, and the two universes never met. Even when I would try to be friendly and smile at someone as they walked by, they acted as if I was completely invisible to them.

I was told by another traveler that most of the violence that happened in the city of Alice was actually Aboriginal on Aboriginal violence, and that they just ignored the tourists. That seems to be the case as I was completely ignored most of the time. I say most of the time because there were a couple of times times when I was smiled at or talked to, but it was rare enough that it was always a shock.

I felt guilty about the association I now had with violence and the Aboriginals in town, so I decided to talk to someone who lived in Alice Springs full time to see what they thought of the situation. Suzanne, the woman who owned and operated the hostel that I was staying in (Alice’s Secret) had a lot to say on the subject.

Suzanne has lived in Alice for about 6-7 years. She said that when she initially came to Alice Springs, first she was shocked at the state of the Aboriginals, then she was saddened, and then she just felt numb. She told me that those were the three stages that most people go through when they come to live in this city. She said that the Aboriginals who were living there had numerous problems. Many of them were homeless, and those who weren’t homeless lived in terrible slums. She figured that the reason there is so much violence among the Aboriginals in Alice is because most of them who live there were kicked out of their own tribes or communities for problem behavior – so they came to Alice.

Suzanne said that some of the major problems facing Aboriginals who try to adapt to our western habits is that they end up becoming obese, developing diabetes, or becoming alcoholics. They hadn’t had sugar or alcohol in their diets for thousands of years before us, so suddenly being introduced to it can cause major problems. It has gotten so bad that now many Aboriginal tribes forbid alcohol completely from entering their communities because of the problems it causes (that video I watched in the art gallery of Adelaide makes more sense to me now, the grandmother was trying to protect her tribe from going down a bad road). Things do need to be fixed or changed – but no one knows how to do so. She said that a lot of the local non-Aboriginal people believe that the Aboriginals who have problems should go back to the desert where they were originally from. However, after they had become so accustomed to living in the city they probably wouldn’t be able to survive the harsh conditions of the desert.

It’s a very sad situation. I wonder if tourists who visit Alice Springs leave assuming that all Aboriginals are like the ones they saw in the city because those are the only Aboriginals they have ever seen. I am even finding it hard to write about this now because I don’t want to give people who might be reading this post the impression that I think less of Aboriginal people because of Alice. I certainly don’t. The Aboriginals were forced to give up their way of life when Australia became occupied by English settlers. They had lived on the land for thousands and thousands of years when suddenly they were overtaken by people who forced them to change, and beat or murdered them if they didn’t. To put it even more into perspective – in the last century (sometime in the 1960’s), thousands of Aboriginal children were stolen from their homes and families and placed into white homes because it was thought that we could help them become more ‘westernized’. It was only in the last couple of months that the new Prime Minister of Australia, Kevin Rudd, apologized to the Aboriginals for this. Suzanne looked a bit teary-eyed herself as she told me that after the apology the Aboriginals living in Alice were on the street, crying.

Now I don’t want you to think that I am trying to come down hard on Australians or the English either. We Americans have done plenty of wrong. The story above is extremely similar to what we did to the Native Americans, and the days of slavery are another terrible mark on our history. I’m just trying to see this from both perspectives – the Aboriginal perspective and the non-Aboriginal perspective. We’ve seen time and time again how hard it can be to have two cultures living simultaneously side-by-side without conflicts.

But now onto lighter topics. I was really enjoying my latest hostel. Everything was painted in funky colors and they had an awesome backyard pool and a little koi pond that was a re-purposed jacuzzi. We were also permitted to a free breakfast every morning! And this was not a cheap free like Toddy’s where the “free” breakfast was two slices of bread and coffee or tea. This was good stuff! I discovered a delicious cereal called Muesli, and we had all the milk we needed. It was almost like being at a friends house as opposed to a hostel.

The people staying at the hostel were all very friendly and chatty. The second night that I was there they held a barbecue to say goodbye to two of the long-term people who had been staying there. This was actually when I had that chat with Suzanne. She was such an interesting woman, an author actually! Unfortunately for me, she writes all her books in Dutch so I won’t be able to read them. Her full name is Suzanne Vissar and she did say that one day her books might be translated into English. On that day I will be ready!

Suzanne originally came from Amsterdam and she ended up in Nimbin where she adopted a child. She moved to Alice Springs because that child’s drug-addict biological parents kept showing up and her door and demanding money. She didn’t want the child to continue to be exposed to that, so she left. She speaks six languages (I can barely speak one!) – French, German, Flemish, Dutch, English, and Japanese. She started out just working at the Alice’s Secret hostel, but she bought it recently from the old owners and was now slowly making improvements.

How wonderful would it be to be a writer who owns a cozy little hostel where you constantly meet people from all over the world and in all stages of life? Talk about getting never-ending writing material! I think I need to take life lessons from this woman.

I didn’t limit my chatting to just Suzanne. I also talked to some of the other people who were staying at hostel – and they told me that Toddy’s (where I stayed my first couple of days in Alice) was actually known for being dirty and having bedbugs every so often. Thank goodness when we were staying there it was in one of the newer rooms, because we didn’t have any problems. Oh, and speaking of Toddy’s, I forgot to mention that Toddy’s apparently once had an alien visitor. Of course, this was according to two drunk guys who saw a space ship in the middle of the night when everyone else was asleep. Toddy’s went with it in a big way! On the map they provide to new guests that shows them how to get around in the area they have a little green man in a spaceship with the words “Alien landed here!” right next to their building.

Well, I think this is enough of Alice Springs. It was a unique city, possibly the most unique of all the cities I have been to yet, and I would definitely recommend people to experience it for themselves. Next post – Cairns!