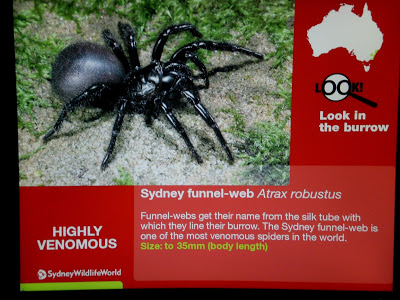 Today all I really did was go to the Australian Wildlife zoo. My feet are STILL killing me, so I couldn’t do much but limp my way there. AND (forgive me, I still want to complain a bit) my calf muscles are bringing me so much pain. I guess I did way too much walking yesterday. On the plus side, I’ll come back to the US with KILLER legs!

The zoo was pretty neat, but I think I didn’t enjoy it as much as I could have because every step was like someone walking on hot coals while someone kicked me in the calf with steel-toed boots. First I went through the bug exhibit. I got to see bees, GIANT ants (ants that I had seen in the wild in Costa Rica so I wasn’t too impressed), nasty huge cockroaches, GIANT stick bugs… you know. Fun stuff. Then I went through the spider exhibit, where I saw the deadliest spider in the world, the “Sydney funnel web” spider, which as you can tell by the name, is found in the city that I am now in! Cool! It was hard to get a good pic of the spider through the glass, but so you have an idea: Then it was on to the snakes. There were some BIG suckers in that place… and of course, I saw the deadliest snake in the world here too. Check it: Next I looked at some huge and crazy looking lizards. I was starting to feel bad for all these creepy crawly’s at this point – even the bees and the ants. I mean, those tiny little enclosures with people like me walking by and gawking and snapping pictures… poor little guys.

And FINALLY we got on to the good stuff, the cuddlies. And because I know you all want to see what Australia is famous for, here you go:

A koala (turn your monitor to the side for this one) And the kangaroos! These two were boxing. Actually, I think the one on the left was the baby and the mom was trying to clean him, and the baby kept pushing her away. It was fun to watch. I didn’t get to hold a koala, because the lady said that it was kind of cranky so they didn’t want to bother it. And, since I’m the one person in the world who is certain to get mauled by a koala bear, I didn’t press the issue.

The last thing I saw was the butterfly exhibit, and a butterfly landed on my foot! That’s like 7-years good luck, right? For both the aquarium and the wildlife exhibit, when you leave you have no choice but to walk through the gift shop, I mean, through the entire gift shop right through the aisles, before you can leave. Are zoo’s and aquariums normally like this? I feel bad for people who take their kids to those places! I, of course, bought nothing. Hah.

So, that was my day. I also went to the Work and Travel office and filled out a bit of paperwork but other than that, I didn’t really do much else. Yet it’s already 7:28. I must have walked REALLY slow.

Did you know that in Australia they put beets on their hamburgers? When you order a hamburger, the beet is right there on the bread, like where we would have our tomato. And it’s a HUGE beet too, like practically the size of the patty! Crazy!

Also, they don’t have oil and vinegar as an option to put on your sub sandwiches.

And finally, so far no Australians have gotten mad at me if I slip and call ‘football’ ‘soccer’. But just try and slip up with that with a British person. They don’t like that at all. I try to explain to them that it’s just habit and because we have American football (just called football to us) it’s easy for me to get confused, so I’d just rather call it soccer thank you very much.

So, that’s it! I don’t think I’m going to really do much tomorrow during the day, just relax my feet and legs I think, because tomorrow night we are doing a ‘pub crawl’ and I definitely don’t want to be the first person to call it a night. I may not update this again until Saturday, unless something interesting happens to me during the day. Also – surf camp is only a few days away! WOO!